Product description
Ingredients
Shipping & Return
Product description
Fresh Scotch Bonnet Chilli from Rwanda the heart of Africa. Exceptionally high-quality chilli pods are picked fresh straight from our farm and delivered to your door. Rated at between 350,000 and 450,000 Scoville Heat Units (SHU).
This pepper is a cultivar of the habanero and is among the hottest peppers anywhere. Its name derives from its resemblance to the Scottish Tam o' Shanter hat, though it appears primarily in the Caribbean and in Guyana and the Maldives. Other names for these chilli peppers include Bahamian, Bahama Mama, Jamaican Hot or Martinique Pepper, as well as booney peppers, bonney peppers, Boabs Bonnet, Scotty Bons and goat peppers. The Scotch bonnet pepper is usually red or yellow at maturity.
It typically features jerk dishes including pork and chicken. Its apple-and-cherry-tomato flavour also pops up with other dishes in Caribbean and African cuisine.
Ingredients: Fresh Scotch Bonnet Chillies
Country of Origin: Rwanda
Net Weight: 4kg
Ingredients
Shipping & Return

These were fantastic, fresh and tasty. I'll definitely order again!

Fantastic chillies. Very happy. Got a 4kg box of habaneros. Only 3 chillies from the whole bunch were unusable from hundreds. Quality stuff. Quick delivery.

Enjoyed shopping here for years, One Stop Chilli Shop sell the best quality peppers in the right quantities. An excellent business, they deserve all the praise they get.

I bought a 4kg box of scotch bonnet peppers and 1kg of habanero peppers and they were absolutely superb!

The freshness and value for money are just incredible and like nothing I had previously purchased from my local market with the added convenience of it being delivered to my door! I will definitely be making more purchases in the future. Many thanks for your outstanding service! :) 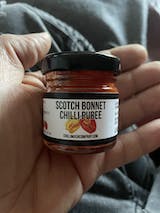